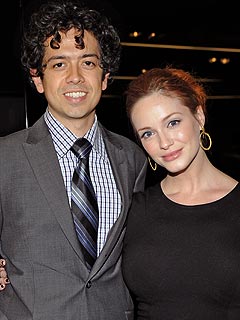 Hendricks said Arend, whom she married in October 2009, has tricked out their Los Angeles home with technology that “blows her mind.”

“The house is rigged,” the voluptuous redhead told PEOPLE Thursday at Ann Taylor’s 2010 Fall Fashion collection showing in the lobby of New York’s Ace Hotel. “He’s got a projector in the guest room with the screen that comes down. We watch movies in bed.

“And everything is wireless,” Hendricks, 34, added. “If he goes out of town, I’m in trouble, because I don’t know how everything works.”

But Arend, 32, who played the sidekick pal in (500) Days of Summer, already has a backup plan for his tech-averse wife. “We’ve got a projector set up with streaming video,” he says. “I have this remote control. All you have to do is press the help button and it fixes everything automatically.”

Even with all their newfangled technology, the couple has some old-fashioned views of romance. “I was just thinking the other day, ‘Oh gosh, I just want to go home and read a book in bed next to my husband,’ ” Hendricks said. “And sleep … Oh, I get to do that every day until I die. It’s a nice feeling.”

Added Arend: “Having the ring on my finger it makes me realize this is the person I’ve chosen for the rest of my life. So everything that was a small little problem that could have turned into a fight, just sort of disappeared. We’re both very happy.”

The Best- and Worst-Dressed Characters on TV

Christina Hendricks on Granting Wishes and All That Wonder Woman Talk